No.2 Car Hangs on in the Battle of the Desert Dunes at the Dakar Rally

SS (competition section) this day was divided into two parts, 205 km followed by a 146 km course. 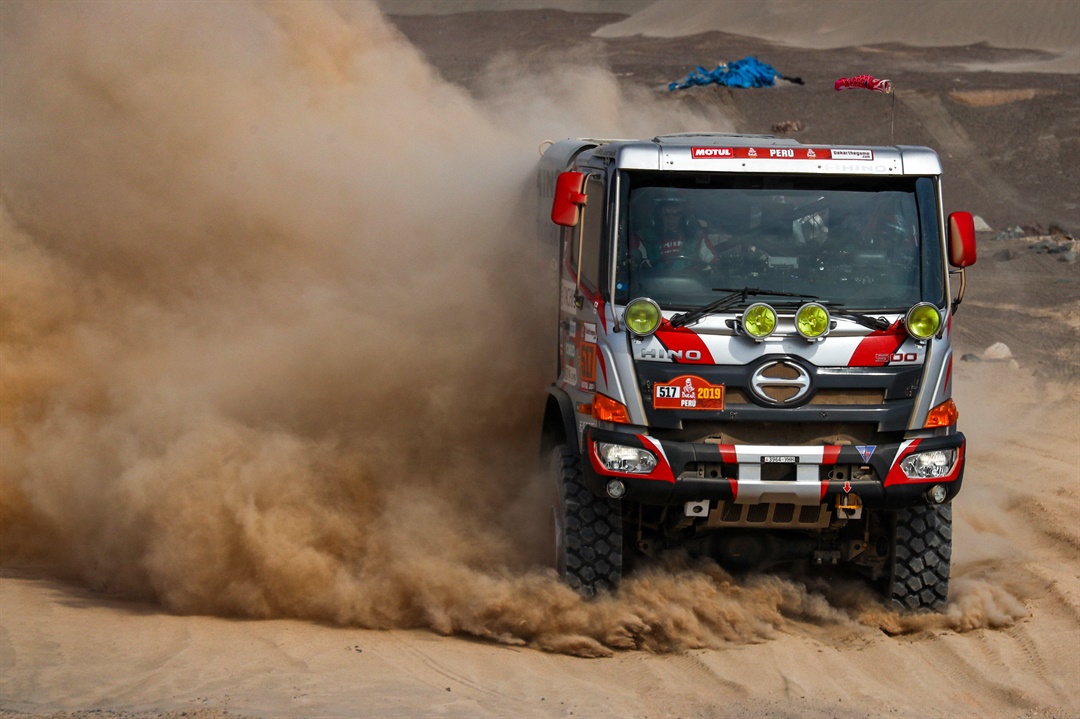 The first car retired in Stage 2 went on "Semi Marathon"

SS (competition section) this day was divided into two parts, 205 km followed by a 146 km course.

The first half of the Dakar is finally over. We entered the marathon stage which goes back and forth between the marathon shelter from Arequipa to Takuna.

On the first day of the competition, our only vehicle (No.2 Car) took some damage but could continue on. Once we arrived in Tacna, vehicles are housed in a closed area and maintenance work can be undertaken by mechanics but supply of parts are prohibited. Drivers and navigators can only work with their own tools and parts.

The Hino Team Sugawara made every effort to ensure the state of the vehicle, including careful inspection and maintenance before starting, replacing leaf springs on the rear axle, engine oil, fan belts and the like.

The Hino Ranger of Hino Team Sugawara, "Teruhito Sugawara / Katsumi Hamura" continues to attack on the day with no major risk and finishes 15th overall in the truck division. As a result, the cumulative ranking has dropped to 13th overall and we are making steady progress toward the goal of 10 consecutive victories in the 10 litre class.

Teruhito Sugawara (No. 2 Car driver)
In the first half of the SS (competition section) on the first day, it was a course of ups and downs and very soft particulate soil, and the second half of the stretch navigating a dead river that was filled with stone. As there are no troubles, we will take a break and prepare for tomorrow.

Katsumi Hamura (No. 2 Car navigator)
Tacna had surprisingly heavy traffic and congestion was apparent. We were surprised that the bivouac was a military facility out of town. The navigation of the SS (competition section) and especially concerned with running the cup off-road in the first half of the competition. I'll do my best tomorrow, too. No. 2 Car came to 10th overall in the cumulative ranking in stage 6

No. 2 Car finished the first half of the course in good condition after the minor repairs.

We returned back to Arequipa from the marathon bivouac at Takuna, a 450 km course. The SS (competition section) started along the coast that moved 42 km from Tacna.

The surface is off road that goes down to the bottom of a dead river covered very soft particulate soil, dusty and easy to get bogged along with stone-rich hills. It also has short but difficult sand dunes.

Driving in the evening, the mountainous area was covered with dense fog and the competition. Due to this, the day was postponed at checkpoint 3,425 km at 5:05pm due to poor visibility. Some of the participants had already passed check point 3, but when they were told to stop at checkpoints they reached.

Hino Team Sugawara's "Teruhito Sugawara / Katsumi Hamura" got off to a good start this evening. They have ranked up to 15th at the start and reached checkpoint 3 at 12th overall in the truck division.

The 12th (Saturday) is an intermediate rest day in Arequipa, Peru.

The Hino Ranger No. 2 Car "Teruhito Sugawara / Katsumi Hamura" is currently the cumulative overall category and ranked number one in the class. There is no rival even close to us, and if we finish, the team will achieve a record of 10 consecutive victories. This has been helped by the new model introduced which has a highly rigid frame, improved front and rear suspension, A09C type engine which aimed at improved output & demonstrates high potential.

On the 13th (Sunday) the new semi-marathon competition started. The first car "Yoshimasa Sugawara / Atsushi Sakurai" who left the race at the 2nd stage due to vehicle trouble will also start.

Also on the 13th (Sunday), after traveling to the vicinity of San Juan de Marcona, we conducted SS (competition section) totalling 289 km in 2 sections. The movement section after this will be the longest stage of the tournament, which is a total extension of 807 km (Semi marathon course is set separately).

Kan (No. 1 Car driver)
Because I got a chance from the organiser, we will run a "semi-marathon" from tomorrow 13 (Sunday). I am looking forward to it.

Sakurai Hitoshi (No. 1 Car navigator)
Although it is a rather tough Dakar Rally, I will return to the beginning and I will do my best for the "semi marathon" from tomorrow.

Teru Sugawara Hitoshi (No. 2 Car driver)
Stage five’s dust was amazing in one day of Feshufeshu. The sand dune was about 20 km, but it was harder than I expected. The risk of the stack is high at the course of the tournament and it seems that the upper rankings are fighting among them.
It is the first time running this new type of Hino Ranger at Dakar Rally, but I feel the height of performance every day. On the middle day we had the rear suspension adjusted to match the run of the dunes. The second half of the race will be a series of pretty tough stages, but I will do my best.

Seiichi Suzuki (Technical Advisor)
I tried to add a bump stopper as the deflection of No. 2 Car's rear bounce as it seemed to be large when it bounced on sand dunes. Other than that, it is going well. There is no crack in the frame and it is in good condition.

On the 13th (Sunday), the Dakar Rally 2019 entered the second half of the race. We covered 289 kms between Arequipa - San Juan de Marcona in Peru.

We arrived at the start point after a long traveling section of 443 km. For this reason, the start time of the SS (competition section) is late, and the system in which the 4 wheels and the truck division got mixed starting with the time order of the previous stage was adopted. It was 12:03 in the afternoon that the Hino Ranger of Hino Team Sugawara started at 12th place of the truck division.

The SS (competition section) consists of two parts. The first part is as short as 57 km, but it passed through the sand dunes of Tanaka, which was a difficult point even in the last competition. Soft sand and intense up-downs bugged the drivers. "Sugawara Teruhito / Kazumi Hamura" group attacked with full use of Hino Ranger's high running performance. We cleared the sand dune and raised the position to 9th place.

After that, we went to the latter half of the SS (competition section) of 232 km, again sand and soft powdery soil sediment continued.

The provisional rank was 9th overall, however we received a 1-hour penalty due to a waypoint mistake. As a result, the interim total cumulative rank has emerged to 10th place. After that, we arrived safely to the bivouac of Marcona around 7:30.

There was damage to the car’s front bumper and the front panel on the sand dunes, but it was no trouble. It was the longest stage of the contest.

The Hino Ranger No.1 Car "Sugawara Yoshimasa / Sakurai Hitoshi" group also went on to race at the second stage. The start time is late so that the competition does not affect the previous competition as it runs on the same course. No. 1 Car starts at the SS (competition section) at 1:06 pm local time. Participants passed checkpoint 2 at 10pm.

Stay tuned to Hino Australia’s Facebook page for the next round of updates.